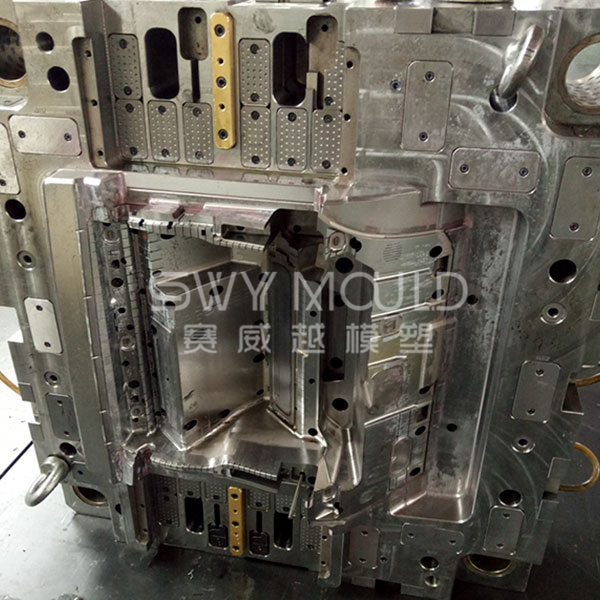 The material of the car glove box is reinforced grade PA66+GF30%. The internal structure of this product is extremely complicated and the shape is also complicated. The shape of the product should be molded by a two-side integral slider. The inner part is molded by the inner core, and the ejection distance is long. The total thickness of (138mm) mold is large, and it is produced by a relatively large injection molding machine. If a 200 Ton injection molding machine can be formed according to the weight of the product, how to greatly reduce mold thickness while ensuring normal production of the product is a challenge to plastic injection mold designers.

There are many design points that need to concern about this mold, here we would like to show you some important points.

Because the raw material of the product is PA66 with 30% glass fiber, fluidity is very poor. Original mold uses 4 hot runners to feed glue. The diameter of the glue point is about Φ3mm. It is not a problem because of this situation. The face of glue is assembled inside the dashboard of the car and does not affect any appearance. In fact, one of the main reasons why the total die thickness of auto molding is too thick is the use of a hot runner system. The thickness of mold cannot be lowered. After consideration, we have adopted such a gate, which is exactly the same as the glue of old mold. It is also glued at 4 points, and the position of glue is the same as the original auto molding. But it belongs to a large nozzle structure (see picture).

As can be seen from the above picture, two bosses are added to the rectangular boss on the opposite side of the slider body. Why?

Because in order to extend the service life of auto molding, the slider body uses more expensive steel and heat treatment. In order to save the cost of auto molding, the slider body is made thinner, the thickest place is 43.6mm, and the 15mm positioning step is removed. The remaining 28.6mm. It is more difficult to arrange screw connected to a large slider seat, and the threaded bottom hole cannot be drilled too deeply so the actual effective number of teeth of the thread is not ideal. Because the sealing ring of cooling water passage of the whole large slider system is pressed by seven M12 hexagonal threads, if an effective number of teeth of the screw is not enough, the screw can not be tightened too much, or it will slip. Now that these two small square bosses have been added, the actual length of thread has increased by 15mm, so there are no worries. From point of view of the manufacturing cost of the mold, a large slider now increases reliability but does not increase material and plastic mold manufacturing cost. This is a small detail of mold design, but the accumulation of these details makes injection molding molds manufacturer gradually improve the design level of plastic injection mold designer in the design process.

As can be seen from the picture, the slider body and slider holder are connected by seven M12 hexagon socket screws, and a seal ring is arranged at the position where water is connected to these two.

The melt temperature of PA66 is very high, and shape of the product is complicated, and the assembly size is required to be stable. Therefore, the position of the cooling water hole arrangement of the large slider system is relatively important. In actual production, a mold temperature machine is used, and the temperature is constant at 110℃. Now I arrange a waterway on the slider body, which is led out by the slider seat through a sealing ring and arranged on two sides of the mold. This plastic mold manufacturing is more convenient.

Fixed mold is designed as a whole without any inserts, see picture.

The inner surface of the fixed mold is attached to a large slider body, and a transverse flow path is formed on the bonding surface, and then divided into four flow passages (see the following picture). The design of fixed mold is very conventional, but in order to reduce stress after injection molding, the design of a cooling system is very critical to injection molds manufacturer.

It can be seen from the above picture that in addition to four waterways in the horizontal direction, the central protruding part is also arranged with a “water pond” so that water path of the whole moving mold is relatively uniform and heat exchange is relatively balanced to minimize residual stress in the product.

Principle of inner shrinking core (see the following picture), the inner shrinking core is divided into two parts, the middle part is fixed on movable template 2, and moves along with it also. Two sides are arranged on movable die plate 1. The slope of the “T” shaped track on the side of the lower constriction slides inward as it moves downward. In order to ensure the movement of the shrinkage block is reliable and has a long life, we have designed a series of corresponding friction mechanisms and fixing mechanisms, which will be described in detail below.

Previous it is a very headache auto molding to injection molds manufacturer, but now it can be fully automated, and the injection molding machine used is smaller, saving energy; secondly, it eliminates hot runner and uses a large nozzle to save plastic mold manufacturing cost of the mold. The bright spot is that two bosses are added on the joint plane of the large slider and fixed mold insert to move the glue point to the middle of the product; thirdly, it uses a cross-shaped protective friction block to make the action of the retractable slider safe and reliable. 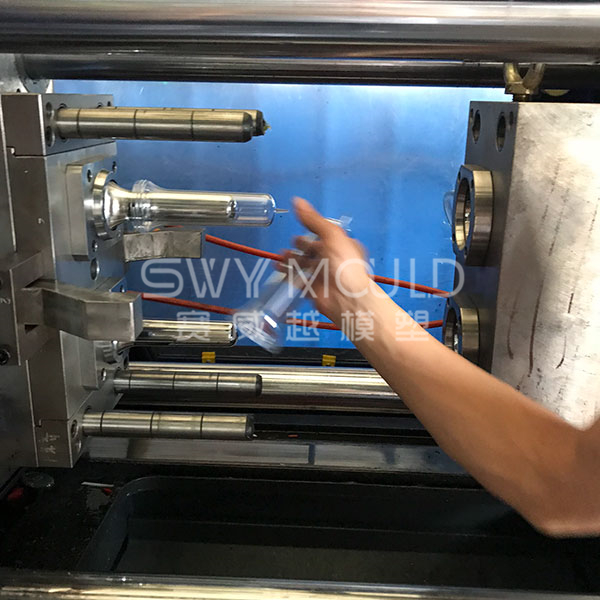 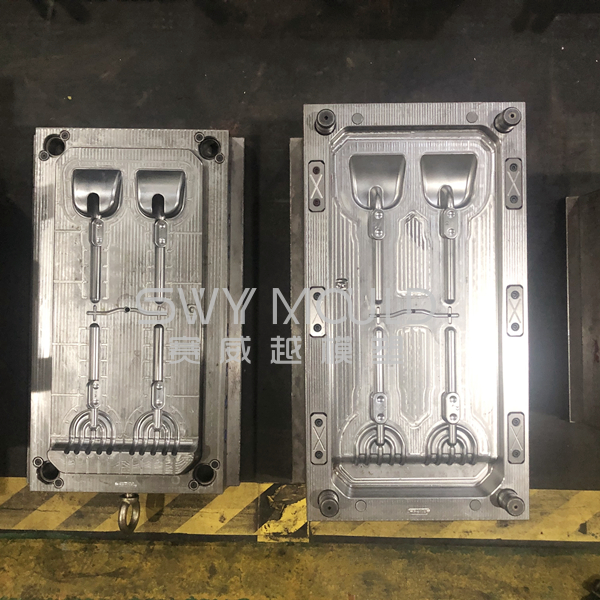 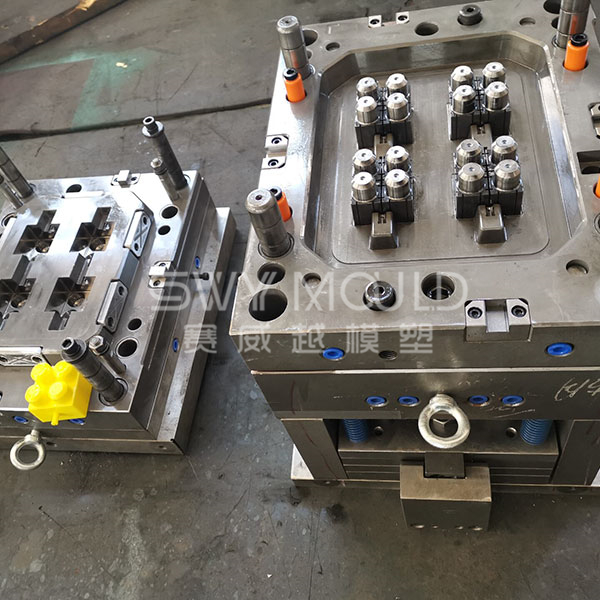 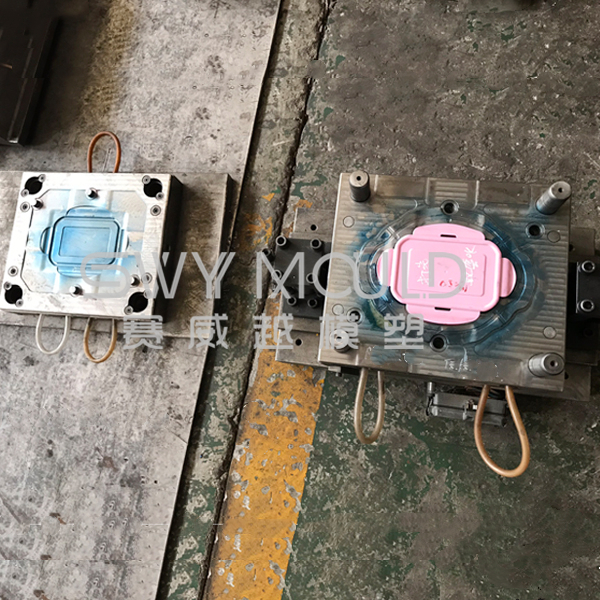